A New Show from Alison Larkin 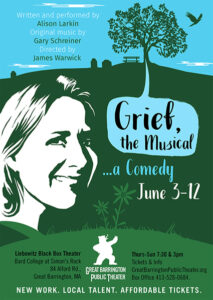 When you fall in love for the first time in your 50’s and the worst happens, you have a choice. You can hide under the bed–or, you can write GRIEF: THE MUSICAL…A COMEDY. Arising from Alison Larkin’s experience with heartbreaking loss, this deeply funny love story blends stand-up comedy, songs, and theatre to bring audiences on a soul-healing journey through joy and the depths of sorrow to the heights of the human experience. 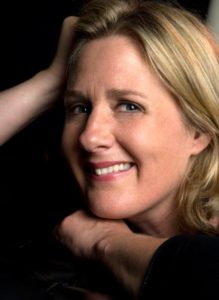 “Alison Larkin offers hugely entertaining, marvellously light-footed reflections on how we become the kind of people we think we are . . . nature versus nature and the ups and downs of the great Anglo American love affair… a lesson in the human condition.” Clive Davies, The Times reviewing Alison’s last one woman show.

Alison Larkin is an internationally acclaimed comedian, award-winning audiobook narrator, t.v. comedy writer and the bestselling author of The English American, a novel which sprang from her first autobiographical one woman show of the same name. Adopted by very English parents, after finding her birth mother in Tennessee, Alison moved to America and became a stand-up comic, because what else do you do? She appeared on Broadway with the Royal National Theatre and off Broadway with the Royal Shakespeare Company. She headlined at the Comedy Store in LA and spent three years in Los Angeles under Hollywood development contract with ABC to star in her own sitcom. Her first show was performed at the Assembly Rooms and the Soho Theatre in London. It was later seen in concert performances on both sides of the Atlantic raising hundreds of thousands of dollars for adoption related organisations.

Alison moved to the Berkshires with her two children in 2010. Since then she has narrated over 200 audiobooks, including the Complete Novels of Jane Austen which is the #1 bestselling Austen audiobook in the world. Her audiobook company Alison Larkin Presents has produced almost 100 audiobooks and won 13 AudioFile Earphones awards for Alison herself and others including Golden Voice narrator Simon Jones and Virginia McKenna. Alison was planning a life in England and India with her fiancé Bhima Nitta, but he died suddenly in August 2020 so now she lives with her rescue dachshund Charlie pondering what to do next. Meanwhile, the t.v. comedy series she is co-writing with screenwriter Lucy Shuttleworth is under development, her audiobook production of Moby Dick is a 2022 Audie award finalist, and her narration of Pride and Prejudice with Songs from Regency England can be heard worldwide on Audiobook Break podcast.

There’s wit to spare in her assessment of both cultures.
—George Manet, Union Jack