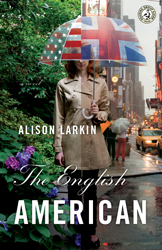 I think everyone should be adopted. That way, you can meet your birth parents when you’re old enough to cope with them. Of course it’s all a bit of a lottery. You never know who you’re going to get as parents. I got lucky. Then again, if I’d been adopted by Mia Farrow, rather than Mum and Dad, today I could be married to Woody Allen.

As far as the side effects are concerned, I discovered early on that the key to dealing with a fear of abandonment is to date people you don’t like, so if they do leave you, it doesn’t matter. Either that, or guarantee fidelity by dating people no one else wants.

Which is why, at the age of twenty-eight, while my friends are getting married to men who look like Hugh Grant, I’m still living with my sister.

Charlotte and I are sharing part of what used to be a Georgian house, before it was turned into flats, in West London, opposite Kew Gardens. The Kew famously referred to by Alexander Pope, on the collar of Prince Frederick’s new puppy:

I am his Highness dog at Kew;
Pray tell me, sir, whose dog are you?

On the morning of the day everything will change, but I don’t yet know it, I jump out of bed half an hour after the alarm goes off, wolf down a bowl of cornflakes, and scrabble about in the bottom of the broom cupboard for an umbrella. It’s raining, of course.

“Charlotte, have you seen my brush?”

“Try your sock drawer,” she says.

My sister is a buyer for Harrods. She’s looked the part since she was three. She emerges from her room, impeccably dressed, blond bob perfectly in place, handbag over her shoulder, car keys already in hand.

“Pippa,” Charlotte says, “you’re a gorgeous woman. Positively Titian. I wish I looked like you, but — how can I put this? Today you look like a plumber.”

I’m wearing overalls, which I enjoy very much. Put a different colored T-shirt under them and it looks like you’re wearing an entirely new outfit.

“I suppose you want a lift to the tube too?”

“Thanks,” I say. God knows how I’m going to get to work on time when Charlotte moves in with Rupert.

We’re almost out of our front door, which has been opened and shut by Londoners for nearly two hundred years, when Charlotte spots a tiny piece of cornflake on my shirt. She takes her hanky out of her pocket and starts jabbing at it with the precision of a woodpecker.

Ever since I can remember, my sister, friends, parents, and occasionally even complete strangers have taken it upon themselves to wipe spills off my clothes. Without asking. They simply assume I feel the same way as they do about food stains. I don’t. I think it’s absurd that anyone thinks they matter.

But I also don’t like to hurt anyone’s feelings. So when people start wiping food stains off my clothing, I act surprised that the stain is there and thank them profusely.

It’s all about what interests you. If I spend a whole day with you, and someone asks me afterward how you are, I’ll know what you’re feeling, i.e., sad, happy, preoccupied, pissed-off — whatever it might be. I’ve always been able to tune in to people in that way. But ask me what you were wearing, and I’ll draw a blank.

Charlotte will not only be able to report on exactly what you were wearing, down to the color of your socks, she’ll somehow know about the hole on the inside of your shirt, even if you’ve tucked it into your trousers. She’ll know the name of your hairstyle, the brand of your lipstick, and the make of your car.

Charlotte was born a year after me. I was adopted. She wasn’t. It happens a lot, I gather. People think they can’t have children, adopt one, and then, bam, a few months later, the mother gets pregnant with a child of her own.

Like Mum, Charlotte thinks before she speaks, makes pros and cons lists, and is content with her life the way it is. She’s practical, grounded, solid, sure.

I, on the other hand, interrupt people because my thoughts fly out of my mouth. My handbag’s full of rubbish. And I want to do something that matters with my life. Right now I’d like to write plays, sing in musicals, and/or rid the world of poverty, violence, cruelty, and right-wing conservative politics.

I’ve tried to be happy leading the kind of life that makes Mum and Charlotte happy, really I have. But pretending to be interested in things I am not is becoming more and more difficult. Take Scottish dancing. If you’ve ever been to any kind of Scottish dancing evening in the south of England, you’ve probably met my dad. He’s the Scot at the microphone, with the shock of thick white hair, barking out orders. He’s never happier than when he’s marching up and down a drafty church hall in his tartan kilt and sporran, teaching the English a new Scottish dance.

There are more than three thousand of them. To date he’s checked off two hundred and fifty-two. He keeps his dance list in the right-hand cubbyhole of his desk, next to his spare golf balls and his paper clips.

“Set to the left!” he shouts. Dad’s lived in England so long his Scottish accent is barely detectable most of the time. Except when he’s trying to teach the English to Scottish dance. Then his Scottish burr becomes much more pronounced.

I’ve always felt restricted by Scottish dancing. You can’t do your own thing. If you twirl to the left and jump in the air when everyone else is turning right during the Eightsome Reel, for example, you’ll spoil the dance for everyone else.

I think it’s one of the saddest things in the world — don’t you? — when people are upset because the direction they’re going in feels all wrong for you — and you know you just have to go the opposite way.