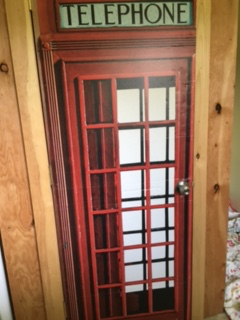 The last time I spent the whole summer in England was a quarter of a century ago. I was in my mid-twenties and working as an actress and a playwright in London. I was just about to go on stage to play Flora Poste in the original stage version of Cold Comfort Farm, when the phone rang in the dressing room. It was a woman from the adoption agency in America who told me that the birth mother I’d been searching for was alive and well and keen for me to come and visit her at her home – in Bald Mountain, Tennessee.

Two months later, after meeting both my birth parents, I went to New York to try my hand at stand-up comedy. Before I knew it I’d fallen in love with the creative freedom I’d found in America, my work took off in interesting new directions, I married, had kids, wrote a novel, way led on to way and although I missed England and went back as often as I could it was never for more than a week or two.

Flip forward twenty-six years and here I am living in the Berkshires with my two all-American teenagers and it’s summer time again and I’m conscious of time passing.

My English parents are in their mid-eighties now and despite evidence to the contrary — they still think nothing of driving up to Pitlochry, Scotland for a weekend of vigorous Scottish dancing for example — they won’t be around forever.

Friends who were single when I left have married, raised children and some have already become empty-nesters.

“I wish I could figure out a way to spend more time in England,” I say to myself, feeling increasingly homesick for the country that I can no longer call home.

“You have teenagers, Alison. They need to be with other teenagers.” I say back.

“There must be some teenagers in England,” I say. “What if I could find some sort of camp for them in the UK?”.

“Sounds expensive,” I say back.

Then someone tells me that the Berkshire Theatre Group is looking for accommodation for their actors and before I know it we’ve rented out our house to the cast of Arsenic and Old Lace, and we’re heading to England for six weeks.

For most of the time we’ll be visiting family and friends, but for two precious weeks, while I re-connect with friends I went to college with, my kids will be at “camp” with British teenagers as interested in film and creative writing as they are.

When I narrate British classic audiobooks by the likes of Jane Austen, Lewis Carroll and Agatha Christie from my recording studio in Stockbridge — a.k.a. The Tardis — I get to travel through time to an England that doesn’t exist anymore.

This summer I’m packing up the studio and heading back. And forward perhaps. Making time to get to know England as she is now. To see what’s changed and what hasn’t.

I’ll keep you posted on what I find.