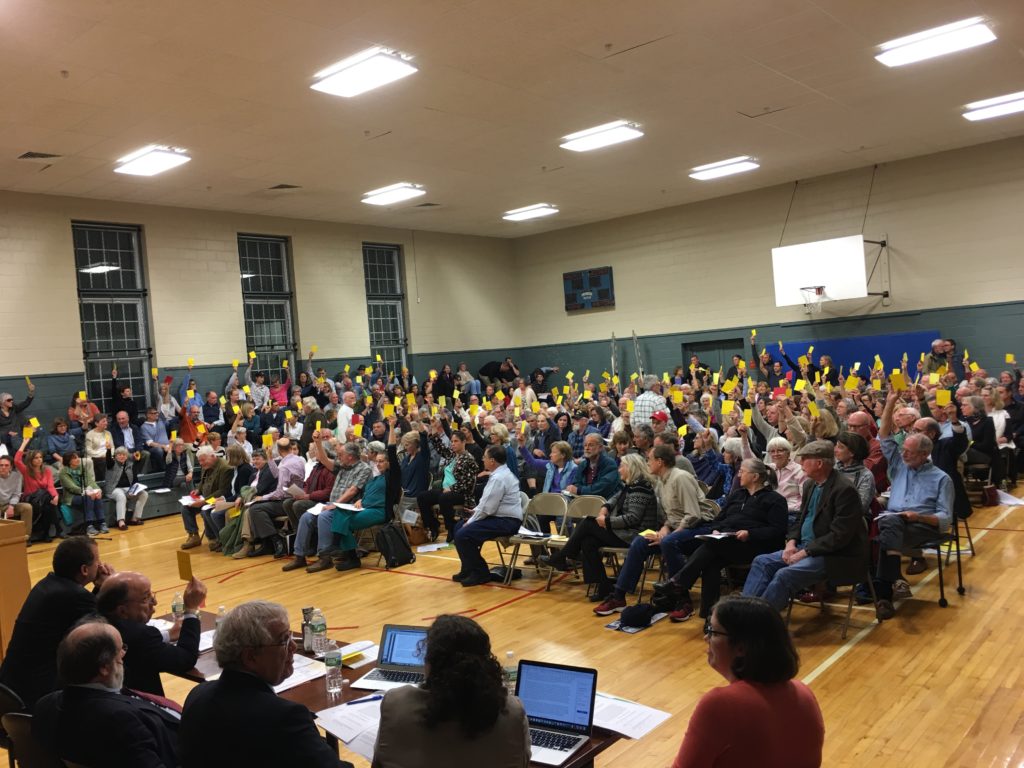 Stockbridge — Although I was born in the U.S., I was adopted by Brits and raised in England. As surprising as this may sound, the British don’t study American history or American politics from an American point of view. What you call the Revolutionary War, for example, was referred to by my History teacher as “that unfortunate incident involving tea.”

Before Monday I had never been to a Town Meeting. But I’m a writer and the mother of a voracious reader who loves the Stockbridge Library, so when a friend asked me if I could come to the Town Meeting in Stockbridge to help oppose a possible motion to reduce funding to the library, I said “you bet,” I had no idea what to expect.

I was truly astonished to see over 250 people there. My doctor and dentist, the guy who hands me my packages at the post office, the owner of the Stockbridge General Store where my kids get bubble gum, the principal of the elementary school, the Art teacher, the superintendent of schools, the guy who fixed my frozen shoulder in five minutes, dozens of people whose faces I recognized but did not know by name and of course the noble librarians and board members from the beloved Stockbridge Library.

First a man with a white beard stood up and asked everyone to vote on the first four issues on the piece of paper by saying “Aye” or “Nay.” There were no “Nays” at all.

“Is the library safe?” I whispered to the woman next to me.

“The Finance Committee thinks we shouldn’t raise our taxes to help capitalize improvements at Monument because we have far fewer kids living in Stockbridge. We’re going to vote ‘for’ or ‘against’.”

“You mean it will be decided here? Tonight? By the people in this room?” I said.

This would never happen in England.

I knew that Monument Mountain Regional High School badly needs fixing — no school should have to use trash cans to collect rain water because the roof is leaking. I also knew that there had been understandable upset amongst Great Barrington voters who felt the financial burden on them was unfairly high.

Times are tough all over Massachusetts. There are many people in Stockbridge for whom even a slight rise in taxes will be a significant burden. ‘Who votes to raise their own taxes when they don’t have to?’ I wondered.

Then, over the next hour and a half, I witnessed people I knew, sort of knew and didn’t know at all come up to the microphone and express their feelings about the pros and cons of taking on more of the financial burden to help ease the strain on Great Barrington.

“Why should we reward Great Barrington?” someone said.

“Because they’re our neighbors and they need our help. And because we believe in education for all children, not just in our town but in the district.”

And then, despite the fact that no one thought it would happen, against the recommendation of the Finance Committee, the people of Stockbridge voted against their own self-interest. We voted to raise our own taxes, to help our neighbors in the next town.

Instead of the exception, what if this sort of thing became the norm?

Editor’s Note: The Berkshire Edge and the Mahaiwe Performing Arts Center have joined forces to encourage discussion about the value of community. The above article represents that effort.