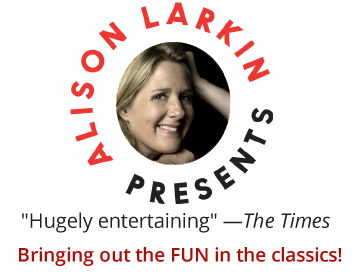 BUY NOW
For every purchase through this link,
$5.00 will be donated to the Jane Austen LIteracy Foundation

200 years since Jane Austen completed her last novel, Alison Larkin, a witty and always original voice, brings Persuasion and a selection of lesser-known poems by Jane Austen to a new audience.

Persuasion
Seven years after Anne Elliot rejects the man she loves after a family friend persuades her that he isn’t a good enough match for her, Frederick Wentworth returns to England looking for a wife.

Poems
Austen did not take herself seriously as a poet but she did write occasional, mostly comic verses to entertain family and friends. Selected and introduced by award-winning narrator Alison Larkin, the poems range from lines found on a piece of paper inside a tiny bag she gave to her niece to When Winchester Races a poem she wrote just three days before she died.

“Raised in England by adoptive parents, Alison Larkin was actually born in America. She herself is a comic writer and performer – and she approaches Austen as a satirist – she has genuine theatrical skill, so her Mrs. Elton, swooping and dipping in flights of arrogant self-serving nonsensical observation, and her Miss Bates, anxious and desperately self-conscious even as she talks without end, are both sustained comic creations. The voice reveals all.” —David Denby, THE NEW YORKER

“There’s a vintage feel to Alison Larkin’s narration. The bell-like quality of her sweetly accented voice harkens back to another, quieter, time – her delivery offers a flexibility that is contemporary and easy to hear.” —AUDIOFILE MAGAZINE