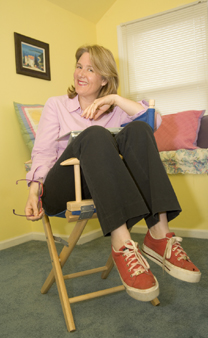 Alison featured and interviewed in The Artful Mind 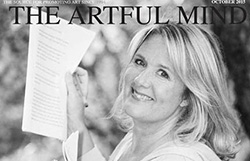 Alison Larkin is an internationally acclaimed comedienne, award winning audiobook narrator, producer, voice artist, t.v. comedy writer, actress and the bestselling author of The English American, a novel which sprang from her first autobiographical one woman show of the same name. Alison trained as an actress at the Webber-Douglas Academy of Dramatic Art in London where she wrote her first one person play, Into the Clearing which was produced at the Edinburgh Festival, followed by Always Have Been Actually, a three person play which was produced at Webber-Douglas when she was 21. Her first full length play, Odd Behaviour, was under development when she she found her birth mother in Tennessee, moved to New York and became a stand-up comic.

As an actress she appeared on Broadway in Stanley at the Royal National Theater and Off Broadway with the Royal Shakespeare Company. As a stand-up she was a regular at the Comic Strip in NY and the Comedy Store in LA. Her first autobiographical one person show was a hit on both sides of the Atlantic and led to Larkin spending three years under studio contract with Jim Henson Productions, ABC and CBS Studios to star in and co-write her own sitcom with Emmy award winning comedy writer Gail Parent. Her first solo show was later performed at the HBO Workspace in LA, the Manchester Royal Exchange, the Edinburgh Festival’s Assembly Rooms and the Soho Theater in London and helped raise hundreds of thousands of dollars for adoption related organizations. Her unusually wide range of voices can be heard in countless cartoons and movies from The Wonderpets to playing the hugely popular Dog Bug in Scholastic Hooked on Math to Pauline in Pauline’s Perilous Pyramid (PBS) to work by James Cameron, Robert Altman and the Coen brothers.

Alison moved to the Berkshires in 2010, since when she has narrated over 200 audiobooks, including the Complete Novels of Jane Austen which is the # 1 bestselling Austen audiobook in the world. Her audiobook company Alison Larkin Presents has produced almost 100 audiobooks and won 13 AudioFile Earphones awards for excellence, including for Alison’s own narration of Sense and Sensibility, The Secret Garden and Jane Eyre. Other award-winning audiobooks produced by Alison include books read by Golden Voice narrator Simon Jones (Right Ho, Jeeves), James Warwick (The Picture of Dorian Gray) and Virginia McKenna (How the Elephant Got Its Trunk and other wild animal stories).

Larkin’s bestselling novel The English American was optioned by Mark Gordon Studios. The  t.v. comedy series she is co-writing with screenwriter Lucy Shuttleworth is under development with Zoe Rocha at Ruby Rock pictures, and her audiobook production of Moby Dick read by Berkshire actor Jonathan Epstein was a 2022 Audie award finalist in Literary Classics and Fiction.

Alison joins her co-writer the screenwriter Lucy Shuttleworth to give her long awaited on-line weekend Masterclass on How To Turn Your Idea Into A Successful Book, Play, T.V. Series or Screenplay on July 23rd and 24th 2022.

Her new solo show, Grief, the Musical …a Comedy opens at the Great Barrington Public Theatre from June 3 – 12 2022.