Welcome to the AudioBook world of Alison Larkin!

For every Jane Austen audiobook purchased,
$5.00 will be donated to the Jane Austen Literacy Foundation.
Learn more

ALISON LARKIN is the multi-award winning narrator of over 150 audiobooks, many of them New York Times and Sunday Times bestsellers. Her voice can be heard narrating audiobooks across all genres, from classics to modern women’s fiction, to mystery, to young adult to blockbusters, to Regency Romance, fantasy, children’s, steam punk and non-fiction.

In addition to being an Audiofile Earphones and Best Non-fiction Audiobook of the year winner, books narrated by Alison Larkin have been appeared on countless Bestselling Audiobook of the Year lists.

“Larkin populates the small town with a terrific variety of characters: snooty, curious, ditzy, or dependable, all with mild Scottish accents. Larkin’s performance makes for a terrifically dramatic climax.” — “Forbidden” by Eve Bunting (Dreamscape, YA)

“Narrators Alison Larkin and James Langton have the skill to make these creepy stories even creepier.” —Your House is on Fire, Your Children All Gone by Stefan Kiesbye (Tantor, Horror)

“Alison Larkin engages listeners with a story that is part complex historical mystery, part chamming romance, and part fascinating travel adventure…Larkin tackles the many different accents and viewpoints in this book with obvious pleasure.” — Shadows on the Nile by Kate Furnivall (Tantor, Women’s Fiction)

“Narrator Alison Larkin is clearly having fun with this witty tale … Larkin gives Dagmar an endearing childlike voice that is perfect for this smart-aleck sprite. Her portrayal of Leopold is equally clever, imbuing him, by the use of well-timed pauses and well-acted dialogue, with panache, intelligence, and humor.” — The Truth About Leo by Katie MacAlister: (Tantor, Regency Romance):

“Narrator Alison Larkin reads this historical romance with a relaxed, even pace and perfect enunciation. .. Perfect accents include Robby’s Scottish brogue, Lilly’s British accent, and the various regional and international accents of people they encounter during the war. Larkin makes this into an éclair of an audiobook…”  — Somewhere in France by Jennifer Robson (Tantor, Women’s Fiction)

“ A listening experience to be savored.” — The Winter Bride by Anne Gracie (Tantor, Regency Romance)

“Reader Larkin is an excellent choice to narrate this delightful classic from mystery maven Christie.  Larkin’s performance captures that sense of carefree enthusiasm for life before the crash. Her reading is champagne bubbly and engaging throughout the book. This is a jaunty, jolly good listen.” Agatha Christie’s The Secret Adversary

“Narrator Larkin—born in America but raised in England—effectively captures Boyne’s characters, particularly the manner in which both class and gender shape daily life. Larkin also does a masterful job rendering the male voices, especially prominent village figures such as the barrister and clergyman, both steeped in the male privilege of the era. Yet, the most memorable aspect of Larkin’s performance is her eerie portrayal of the two young children at the center of the otherworldly forces that Eliza encounters.” — This house is Haunted by John Boyne (Tantor, Horror.)

NPR
“What an audiobook! I loved it! I didn’t want it to end!”
Alian Chartock on The English American by Alison Larkin Winner of the AudioFile Earphones Award, Audible Studios/Brilliance audio

Audiogals
“Larkin is a superb narrator” 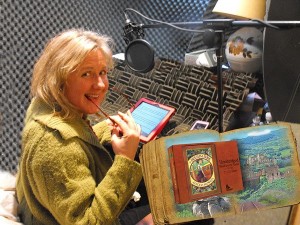