I was adopted into a loving English family and spent a lot of my childhood in Sussex, not far from Chawton where Jane Austen lived and wrote. I went to country dances in the same church halls that were used for dances in Jane Austen’s time. I was pursued by my share of Mr Wickhams, I was as amused by life as Elizabeth Bennet, I endured the company of many a Mrs Elton and Lady Catherine de Bourgh, I fell in love with my own Mr Darcy.

Then, in my mid-twenties, while working as a classical actress and playwright in London, I found my birth mother in Tennessee, moved to New York and became a stand-up comic. Because what else do you do?

I wrote a one-woman show that led to Hollywood sit-com deals, an exciting voice career, keynote speeches, a London run and The English American, my autobiographical novel about an adopted Englishwoman who finds her birth parents – and herself – in the United States. I was a long way away from Jane Austen’s England.

These days, over twenty years later when I’m not writing, performing or trying to think of something edible to feed my all-American kids, I narrate and produce audiobooks from a small town in rural Massachusetts, near where Norman Rockwell painted and Herman Melville wrote Moby Dick.

I love my life in America. But there’s so much about England that I miss. In addition to my family, I miss Marmite, cream teas, Sunday lunch, people who don’t flinch when I offer them steak and kidney pie, Waterloo station, friends from way-back-when, gum boots, long country walks, blackberry picking and being around other people who apologize constantly for things they didn’t do.

However, even though I can’t get back to England as often as I would like, as an audiobook narrator I do get to travel to England in my imagination. All without having to leave my recording studio – aka The Tardis. And nothing has given me a greater sense of homecoming than narrating the novels of Jane Austen. 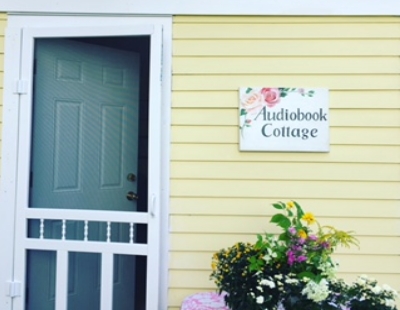 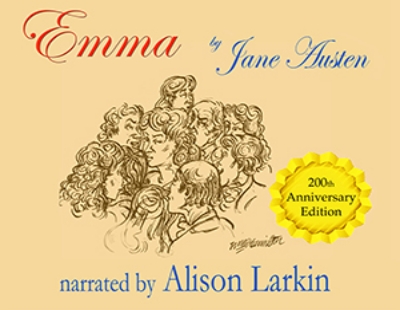 While it was the romance that first drew me to Jane Austen, as an audiobook narrator preparing to narrate them for a modern audience, I was struck by how deeply funny Jane Austen’s novels are.

As every modern day comic writer/performer will tell you, the best humor comes from truth. Jane Austen knew this too.

As Austen’s famous characters came to life in the recording studio, my greatest challenge was to get through each scene without laughing. I’m sorry to say it took me over two hours to record the scene when the obsequious Mr Collins proposes to Elizabeth in Pride and Prejudice. Mr Woodhouse’s views on the evils of eating cake in Emma was another trouble spot. And every time Anne’s sister complained in Persuasion I howled in recognition.

In keeping with the Alison Larkin Presents’ mission to bring the novels of Jane Austen to a modern audience in a wholly, accessible way, the cover illustration of Emma was drawn specially by New Yorker cartoonist William Hamilton. In order to give listeners an authentic sense of what after dinner entertainment might have sounded like in Jane Austen’s England, we released Pride & Prejudice with Songs from Regency England, and added some less well known Jane Austen poems to our recording of Persuasion.

Northanger Abbey, Sense and Sensibility and Mansfield Park are coming soon! On a recent trip to England my parents and I visited the Jane Austen Museum in Chawton and two wonderful things happened. While strolling in the garden, I was approached by a Jane Austen enthusiast who had heard my audiobook narration of Emma and said “At last! A narrator who understands that Jane Austen is FUNNY!”

Then, I met the Knight family, the last of the Austen descendants to live at ‘Chawton Great House’, as Jane called it, when it was still their family home. In Chawton I met Jeremy, Edward Austen’s third great-grandson who was full of amusing tales and family anecdotes and a week after I returned to America, I spoke to his daughter – the brilliant, effervescent Caroline Jane Knight, Jane Austen’s great-great-great-great-great niece – who really is great – literally and metaphorically. Caroline told me about the work she is doing and asked me if I would like to help literacy in honour of Jane Austen.

There are a lot of good things happening in the world. The Jane Austen Literacy Foundation is one of them.

And so when Caroline asked me if I would like to be an Ambassador for the Jane Austen Literacy Foundation in the United States, I said, “Yes. I would.”

Because what else do you do?

For every Jane Austen audio book bought before the end of December 2016 from Alison Larkin Presents, five dollars will be donated to the Jane Austen Literacy Foundation. The money raised will be used to provide literacy resources to immigrants and refugees in Southern Berkshire County, Massachusetts